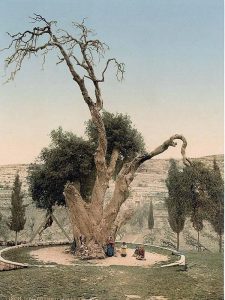 I was reading where Samson visits Gaza (and the prostitute) in Judges 16. The people there waited to ambush him at the city gate. “At dawn we’ll kill him” (not at night). So in the middle of the night is when Samson took hold of the city gate and carried it to the top of the hill facing Hebron (Hebron = union or binding, where God promised Abraham a son).

After that Samson fell in love with Delilah; and the Philistines began to toy with him to find out the source of his power.

Shouts of the context in Matt 11 especially concerning the city gates (kingdoms), violence toward the kingdom of heaven (speaking of John the Baptist and Christ) and the children toying with flutes and dirges in the marketplace (vs.12-19). Calm, but wrenching times.

Samson is named by the writer of Hebrews as being justified by faith. But while he was called by God to turn the tide against the Philistines, the story as a morality play doesn’t make sense. As an allegory, however, Samson pictures the three relationships of God and man. Samson’s first love was his wife. But she was given to another suitor and died (Adam and Eve). Samson solicited the second woman as told in the above story (Israel). The third was Delilah, the love of his life (the world). But because of her, he died.  And it all started with a riddle. (For more discussion on Samson, go here.)

Then thereʼs the letter to the Hebrews, which is rightfully called a tract to Godʼs chosen people. Samson is mentioned as being justified by faith in a book of judges who live by faith. And the letter is written to the “Hebrews”—not the “Jews” as everywhere else in the NT. It’s as if to plant the city gates toward the east and focus the attention of the Jews on their origins at Hebron (due east of Gaza): from which they get their name, the promise of the son through whom all nations will be blessed, and the resulting bonding of God and man. (For more discussion on Hebrews, go here.)

At Hebron, it was under the oaks of Mamre that Abraham was given the news of a son. In the shade of a garden of trees. But the fruit of these trees was inedible (bitter, causing stomach aches, unless first leaching out the tannins from the acorns). But no matter. There is fruit of another tree to come.

(Gotta love the echoes of imagery.)

The oaks of Mamre, then, is a garden of trees with fruit that is not eaten. But the fruit of one tree must be eaten. (This fruit would come through Abrahamʼs seed.) The converse of Eden.

This tree became a large, complex and slow-growing genealogy as it turns out (the history of Israel). But later weʼre told that the fruit would come through the branch of Jesse (Isaiah 11).

Which brings us to the Gospel—and the death, burial and resurrection of Christ. Jesus said we must eat and drink of him (John 6: 54 and elsewhere, the imagery of fruit from a tree). “The kingdom of heaven is at hand,” Jesus and the disciples preached. Speaks of reaching up, picking and eating (as oppose to stooping over to till the ground). And Jesus was crucified on the timbers of a tree.

Then thereʼs this curious phrase:

But it was through this cursed “fruit” that all nations would be blessed.

The ground that was cursed by God in Genesis had no cause to be cursed, in and of itself. It was cursed because of man. (Gen. 3: 17)

Same as the one who was hung from a tree.

The ground took the curse upon itself and became work for man.

The one who was hung from a tree took the curse upon himself and became rest for man.

And this rest would be like an oxen paired in the yoke of another. So one would do the heavy lifting to make the way easy and burden light for the other (Matt 11:28, 29). And as one, man and God would take on the labors of the ground (Proverbs 3: 5,6).

“…The servant’s master took pity on him, canceled the debt and let him go.

Now, thinking back a little further:

Genesis 4 The story of Cain

The Book of Exodus The story of Moses

Moses was also a murderer. And he escaped into exile from his own people (who would have turned him in). But did he ever value the grace of God over the justice he was due?

Then there’s the story of the unmerciful servant who, having received the grace of his master, applied the justice he was due upon others.

Justice is simply the balancing of the books in a marketplace world. It’s the eye-for-an-eye compensation, and getting change at the grocery store. If I hurt you, you hurt me (lawsuits and prison sentences). And if I kill, then I must die. But grace assumes value only in God. So it freely gives, turns the other cheek and spares.

We don’t know what happened with Cain, but by the grace of God, Moses returned to his people and faced the justice of men head on. But the unmerciful servant valued his justice over the grace of God and was thrown into prison until he paid the last cent.

My justice or God’s grace. It’s a ruthless choice.

But the judgment of God is this: If we insist on justice, he will hold us to it.